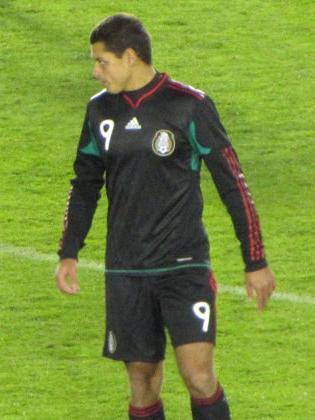 You have to hand it to Mauricio Pochettino.

It seems that almost every time you pick up the papers you read about another bit of dead wood that the Tottenham head coach has managed to offload.

Vlad Chiriches and Emmanuel Adebayor are the latest players who look set for the exit as Tottenham continue to streamline their hitherto massive squad.

And now it may be time to spend as Spurs have been linked with a move for the brilliant Manchester United forward Javier Hernandez.

Tottenham are poised to step up their interest in Javier Hernandez once Emmanuel Adebayor’s exit is sealed.

There is a feeling that Manchester United may wish to retain the services of the player this season after they released RvP and Radamel Falcao.

But the will of the player will also be central to this deal. He knows that if he stays at Manchester United he will most likely be a back up for Wayne Rooney this season.

But if he moved to Tottenham he would surely have a better chance of starting matches – or at least getting more game time than he would at Old Trafford.

With 40 goals in 74 games for Mexico this is a player who scores goals wherever he goes and, at 27, he should now be in his pomp.

He hit 9 in 33 games for Real Madrid last season, even though he came off the bench in most of those games. And his overall club career reads 97 goals scored in 267 games.

He’s a top finisher – a fox in the box – who would improve most squads in the world.

If Tottenham can get him they should definitely pull out all the stops.

Report: Tottenham to miss out on midfielder but could be close to offloading another expensive flop
Highly respected source: Tottenham to enter negotiations to sign forward
To Top