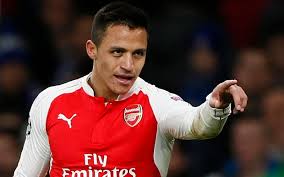 Arsenal may have shot themselves in the foot by keeping Alexis Sanchez against his wishes, with Manchester City ready to go back in for the forward in January.

The Sun report that after offering £60million for the Chilean on Deadline Day, City are only willing to pay £20m in the New Year.

Sanchez will be free to negotiate with foreign clubs when he has just six months left on his contract, but Pep Guardiola remains keen to take him to the Etihad.

The 28-year-old will be available for nothing next summer, though Guardiola is reluctant to wait until then in case another team steps in and steals him from under their noses.

It will be interesting to see how City accommodate him given their already potent attack of Sergio Aguero and Gabriel Jesus, but it’s likely he’ll play just behind the striker.

Had Arsenal allowed him to leave in August, they would likely have earned significantly more money to reinvest in a replacement.

The Gunners pulled the plug on a deal after failing to bring in Monaco’s Thomas Lemar.