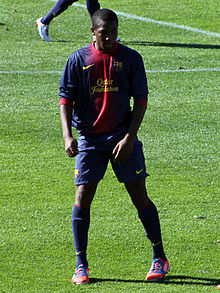 British media outlet, The Metro is nothing if not keen. But they, amongst others, have reported this week that Manchester United may be about to pay the release clause of a talented young forward. They say:

Louis van Gaal has strongly implied this week that he is on the look out for creative talent who can make the difference at the top end of the pitch and, while this guy is only 19, he does look like a really exciting prospect – perhaps too exciting for Barcelona to release without a fight.

He’s played 4 games for Barcelona over the last two seasons.

With the competition for places as it is in the squad it’s some achievement to get any game time at all in the first eleven of the European Champions – just ask the celebrated 27 year old Pedro.

If Pedro does move on this summer then perhaps Traore can expect more minutes.

But with Messi, Suarez and Neymar up front, the prospect of serious involvement still seems pretty remote.

He may enjoy a loan move or even push for a permanent transfer.

Because, whatever age you are, professional footballers want to play football and, looking at his highlights, this guy could be getting starts for a good side already.

He probably wouldn’t start for Manchester United either but he does have real potential and few Reds fans would argue if Louis van Gaal snapped this lad up this summer.