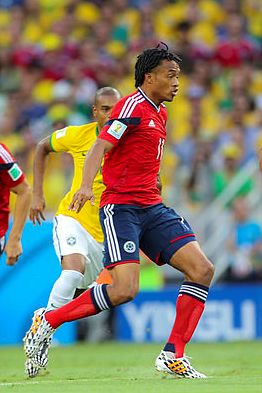 Great news for Chelsea as Fiorentina coach Vincenzo Montella has said that the much anticipated deal for Juan Cuadrado has been completed.

“I want to be honest: it [the sale of Cuadrado] was something that had to be done.

“As a coach I’m sorry because technically he is such a good player but the club has made the right decision.

“We get a great player in Salah although we will need some time to adapt to each other. Salah is not quite the same player as Cuadrado and can’t play as a quinto, so we will need a ‘vice-Joaquin’.

The Salah deal is said to be a loan move as Chelsea clearly still rate the potential of the lad. But, in Cuadrado, Chelsea have signed a really top player who is coming into his peak years.

He’s a definite upgrade on Andre Schurrle and that is saying something considering the quality of the German international star.

It looks as if Schurrle will join Wolfsburg any time now in what has been a large and assertive piece of business on the part of Chelsea. Jose Mourinho knows exactly what he wants and he has made superb signings since he came back to the club.

Fans will now be waiting anxiously for news of whether the club gets the deal over the line quickly enough for the player to appear against Manchester City tomorrow.

With Diego Costa and Cesc Fabregas likely to miss out the addition of Cuadrado could be a real boost for The Blues.

Let’s see some of his better moments while we wait to see him in the flesh. Chelsea fans: are you made up with this deal?

Chelsea: Medical scheduled for winger on Friday
Chelsea considering shock transfer of yet another forward
To Top