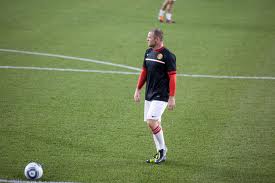 Another super performance where Manchester United found a way past Liverpool after looking overwhelmed in the first half hour by Liverpool’s pressing game, high up the pitch.

So what did we learn about Manchester United?

Fletcher showed fragility – he’s been one of the standout performers in America for Manchester United and has really excelled in the holding role.

And lets not forget that Manchester United have played two games in three days in serious heat. That would take it out of even the most athletic young player.

But Fletcher gave the ball away in several unforced errors and generally looked a bit sluggish. We definitely think Manchester United need to buy another anchorman for the new season.

Defence needs a tweak – another standout performer from the tour, Jonny Evans, had an absolute shocker in the first half against Liverpool before being hooked at half time.

A couple of times he simply passed the ball into space without a player in sight. He looked as if his head had gone.

Evans is a quality player but Manchester United are going to need another authority figure in there. But apart from Jones’s slightly clumsy tackle for the penalty he and Smalling once more excelled. Blackett had another really good half too.

Rooney to have his best season – we really do hope that Wayne Rooney stays fit because he looks the sharpest that we have seen him in preseason. Wazza looks in fantastic physical shape and ran himself into the ground against Liverpool. He was clearly desperate for that win with the captain’s armband on. We think that he and Van Persie are going to score crazy amounts of goals this season. 60 plus between them, fitness permitting.

Wingback reinforcements – Luke Shaw showed for the first time in this game that he’s going to be a really top Manchester United player. He demonstrated his great athleticism and wonderful composure for one so young – we can’t wait to see more of him this season. But United don’t have an awful lot of senior cover at left wingback (save for Young) and perhaps Louis will decide to add another one down the left side. And, down the right, Valencia and Rafael may see more competition – ideally from Juan Cuadrado.

Reclaiming the title – never ones to sit on the fence soccersweep believes that Manchester United will win the title this season. They have got off to a fantastic start and we think they can wipe the floor with the opposition due to their quality, unity and desperation to get back to the top table of European football.