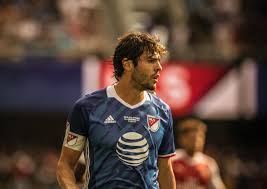 Ballon d’Or winner Kaka has admitted he came close to joining Manchester City in 2009 before pulling the plug on the deal.

The 35-year-old is now playing for Orlando City in the MLS, but there was a time when he was arguably the most coveted striker in football.

Having scored 70 goals in 193 appearances for AC Milan, the forward eventually signed for Real Madrid, where he enjoyed a decent return by most standards but never quite recovered his earlier magic.

His career might have panned out very differently too, had he joined Sheikh Mansour’s revolution in the Premier League.

“It came to the point where all of the numbers and the finer details had been discussed. The wages I had been offered were much, much higher than what I was earning with Milan. I found myself wondering what my life playing in England would be like, what my routine at this new club would be, how difficult it would be for my kids and my wife to move home. All of these thoughts were swirling inside my head.

“I’d absolutely no idea that City were interested in signing me until they’d actually made their official offer to Milan. They had gone straight to Milan.

“I came to the conclusion that it was not quite the right time for me to go to City, and the main reason was the uncertainty over the squad-building process.

“It wasn’t clear to me how the squad would be reshaped and I wasn’t convinced it would work. I was being asked to swap one of the most historic and successful clubs in Europe for a team who were only at the beginning of a new project, where I was supposed to be the first big player. It was safer to stay at Milan.”

In 2009, City were still ‘new money’ and were looking for a marquee signing. Those early days were characterised by some very questionable spending indeed, with the likes of Robinho and Jo never settling in the north-west.

It was an art they finally perfected as they have won two league titles since then. Kaka was not to know that their project would yield results, however, and it would have been groundbreaking for him to leave Milan for City back then.