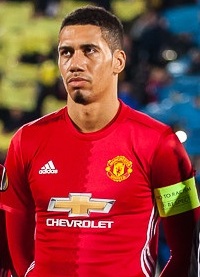 Jose Mourinho has decided to sell Chris Smalling this summer and the centre-back is being eyed by three clubs.

According to the Telegraph, West Brom, West Ham, and Everton are interested in a £15million bid.

The imminent arrival of Victor Lindelof from Benfica appears to have been the final factor that has squeezed the former Fulham man out.

Mourinho already has Eric Bailly, Marcos Rojo, Daley Blind, and Phil Jones to choose between, and Smalling has not had a particularly impressive season.

United faced a defensive crisis this season but presumably, they will not retain all their current options in case of the unlikely event of the same circumstances repeating themselves.

Smalling has also had a strained relationship with his manager. Mourinho publicly slated him to reporters for refusing to play through the pain earlier this season when it transpired he had a broken toe.

Everton and West Brom are actively looking for defenders, while West Ham could pair him with January signing Jose Fonte.

The 27-year-old joined United in 2010 and has won two Premier League titles during his time at the club.