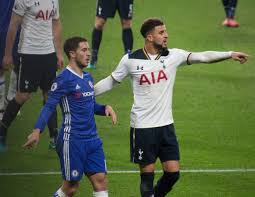 Kyle Walker to Manchester City is one transfer rumour that is refusing to go away.

The Tottenham right-back played a diminished role under Mauricio Pochettino towards the end of the season amid concerns he wasn’t fit enough to feature in two games a week.

Thanks to the emergence of Kieran Trippier, Walker is one star who Spurs can probably afford to lose.

However, they are not willing to let the defender go unless City meet their ever increasing valuation of him.

According to the Mirror, their initial price of £40million has been hiked up to closer to £60million now that they have seen the kind of money Pep Guardiola has been spending.

City have already signed Bernardo Silva and Ederson for £43million and £35million respectively, so Spurs see no reason why they should not take advantage of City’s spree, especially with full-backs a priority position for Guardiola.

The Virgil van Dijk situation has further convinced Lilywhites chairman Daniel Levy; the Southampton centre-back is being talked about as a £60million player, and Walker has significantly more Premier League experience than him.