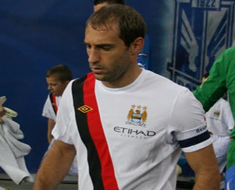 Pablo Zabaleta has confirmed he will be staying at Manchester City after talks with Pep Guardiola.

The Argentinian is no longer the club’s first choice right-back as Bacary Sagna has now nailed down that position, but he will see out the remainder of his contract – which still has a year to run – nonetheless.

Despite interest from numerous sides in Serie A, Guardiola has convinced him to stay at the Etihad.

“I don’t know how many times I was away to Italy. It was incredible. Every day there was a new club,” the defender told Sky Sports.

“I’ve always been away from that because I knew from the first day it was my decision [to stay]. I had been told by the new manager that I was part of this squad for this season, so I am more than pleased for this because City was my priority.”

It’s wise of Guardiola to keep him on as he needs experienced defenders, especially with Vincent Kompany’s ongoing injury worries.

City have failed in their pursuit of Leonardo Bonucci, who is admittedly a centre-back, so Zabaleta is another leader in the dressing room who the Sky Blues boss can’t afford to lose.

He has won the title twice, first under Roberto Mancini, and second, under Manuel Pellegrini. And there is every chance that he could be about to make that three times.

Zabaleta is now entering his ninth season in the Premier League and has made over 300 appearances for City.