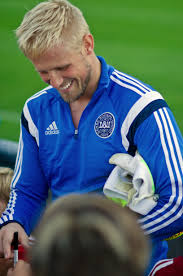 Leicester are becoming more proactive in keeping their star players, with ESPN reporting that Kasper Schmeichel has signed a new five-year deal.

The Danish goalkeeper was instrumental in the Foxes’ title success last season, keeping 15 clean sheets as they gained a reputation as 1-0 specialists.

N’Golo Kante’s departure to Chelsea, and pre-season defeats at the hands of Paris Saint-Germain and Barcelona, have reiterated the need for Claudio Ranieri to keep hold of his main men if his side are to have any chance of competing properly in the Champions League.

Schmeichel was reportedly attracting interest from Everton, who are looking for a goalkeeper to replace Tim Howard who left at the end of last season.

The 29-year-old will now be among the club’s highest earners, though it’s possible he would have followed Jamie Vardy’s example and snubbed the opportunity to move regardless.

Ranieri’s defensive work means Schmeichel has much more to gain by staying in the East Midlands than moving on to Everton, who had one of the worst defences in the Premier League last season.

That should change under Ronald Koeman, but it’s arguably not worth the stopper taking the chance.