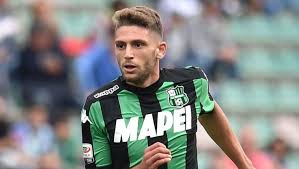 Sassuolo are determined to keep hold of wonder-kid Domenico Berardi, despite reported interest from Tottenham and Inter Milan.

La Gazzetta dello Sport claim that Giovanni Carnevali, general manager of Sassuolo, has rejected speculation that Inter have made a bid.

“With Domenico we made ​​an important decision 20 days ago: he chose to play with us next season”, he said.

The 21-year-old was also heavily linked with Spurs a few months back, and it’s not surprising given his role in leading his current club to Europa League qualification in a toughly-contested Serie A.

Sassuolo have a reputation for developing young talent, with Berardi the latest to thrive under that policy.

That would make him a great fit for Mauricio Pochettino, who is interested in signing a player who is not just an out-and-out forward.

Spurs need someone who could either provide cover for Harry Kane, or support him in midfield when they employ a 4-1-4-1 formation.

It looks as if Berardi is no longer an option, so they may end up having to pay more elsewhere.