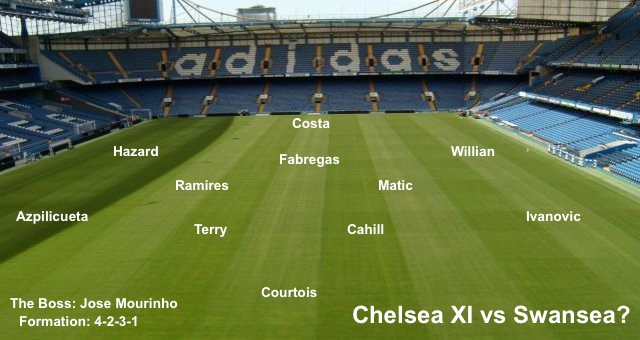 The main question over the Chelsea team this weekend surrounds the fitness of the player who is fast becoming the star of the team – Diego Costa.

Jose Mourinho confirmed in his press conference on Friday afternoon that the rest of the squad is fully fit. Meanwhile Diego Costa is being assessed today.

Four goals in three league games so far suggest that Costa could be prolific in this new setup if he can maintain his fitness.

And therein lies the problem. He only lasted nine minutes of The Champions League final in May due to his troublesome hamstring and the same problem seems to have resurfaced in early season and again on international duty last week.

Chelsea fans will hope that this is not a persistent problem for the player as he could be the difference between silverware and second place this season.

But they made another brilliant purchase in the shape of Loic Remy and we think he should get the nod ahead of Didier Drogba if Costa is injured.

Other than that Chelsea have a fully fit squad and an embarrassment of riches in the midfield. Jose has to pick 3 to play behind the striker in is 4-2-3-1 and we believe that, on form, those three should be Hazard, Fabregas and Willian.

The defence is looking really solid and Filipe Luis might struggle to get a game right now with Azpilicueta and Ivanovic doing so well at full back.

So there are very few changes from the team which ultimately trounced Everton. The only change could be Costa but we think he will be ok and get the nod from the start against Swansea.

So here is our strongest XI, fitness permitting. Chelsea fans: what do you reckon?

Chelsea or Manchester United? Who did the better transfer business?
Picture: Chelsea’s strongest XI vs Schalke
To Top