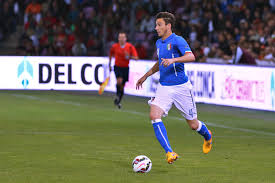 Napoli and Roma are both sounding out Manchester United about a move for Matteo Darmian, according to Sky Sports.

The Italian is yet to make a competitive appearance under Jose Mourinho, missing out on the Community Shield against Leicester and the first game of the Premier League season against Bournemouth.

That has led to speculation that there is no place for him at Old Trafford, but he is still held in high regard in his native country after an impressive Euro 2016 campaign.

Darmian’s form went off the boil towards the end of Louis van Gaal’s reign and he hasn’t so far had a chance to kickstart his career again under Mourinho.

Antonio Valencia appears to be United’s first choice right-back, with youngster Timothy Fosu-Mensah another option if he doesn’t go on loan.

There is still hope for Darmian, however, as he can also operate at left-back, which could be useful given Luke Shaw’s injury record, but there is a real possibility that he will be tempted by more regular football at one of Serie A’s top clubs.