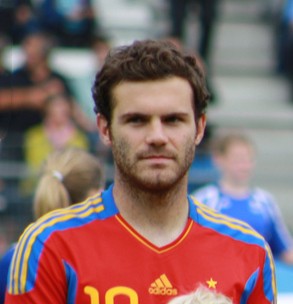 If Manchester United sign Pedro, as still seems eminently possible despite recent reports, then he will naturally slot in on the right of the front three.

That’s where he normally plays for Barcelona. And, although a very flexible player, Louis van Gaal will surely let him adapt to a new country as quickly as possible by putting him in familiar territory on the pitch.

But Juan Mata continues to be a bright spark for Manchester United up top and was their most creative performer against Villa on Friday.

So we can assume that a move into the hole is now inevitable for the Spaniard.

Memphis Depay looked far more convincing on the left than he did in the number ten spot which he occupied throughout preseason and on Matchday 1 against Spurs.

And Adnan Januzaj, the scorer of the decisive goal in the game, was also a more natural fit in that position than the Dutchman.

But if and when Pedro comes, then we see the formation taking shape with Mata at number 10.

Even though he played on the right again on Friday his best work came when he drifted in to the middle of the park.

His though ball for Wayne Rooney in the second half showed the damage that Mata can do in the centre of the park.

Mata isn’t the quickest or most powerful player.

Therefore he isn’t suited the flank in The Premier League.

He’s much more about touch, guile and craft.

So Louis van Gaal should put runners like Pedro, Memphis and Rooney around him and let the Spaniard pull the strings.

Manchester United fans: is a move into the middle inevitable for Mata?